The westernization of Japan saw rapid development in printing technology as well as the media. The appearance of newspapers and magazines saw these publications take center stage among the advertising media. In turn, this brought about the advent of ad- vertising agencies, signaling the start of the history of modern advertising which continues to this day.

Newspapers and magazines:
the dawn of mass media

In the Meiji period, the advent of newspaper and magazine media facilitated the convey- ance of large amounts of information to a much broader range of people. The newspaper played a vital role in modern advertising.

Economic development saw the appearance of new advertisers such as producers of over-the-counter drugs and tobacco. For cigarettes, the advertising competition between domestic and foreign-made tobacco products garnered public attention, and new sales promotion ideas such as giveaways and street advertising competed for product recognition.

Japanese society and everyday life under- went a dramatic transformation during the Meiji period. Horse-drawn carriages, rickshaws, and bicycles appeared on the streets, and Western culture was prevalent everywhere with more and more people beginning to sport cropped hairstyles and Western clothing. This westernization was evident in the advertising of the time.

The trade fairs were designed to showcase Western culture and develop Japanese industry. Answering the call of the new Meiji government’s Shokusan Kogyo policy for encouraging new industry, products and fine articles were gathered from all over Japan to create events that would gather people by the millions.

Posters:
the introduction of a new media

The latter half of the Meiji period saw the gradual spread of large-size printing brought about by European and Amer- ican lithograph technology. Morinaga, a sweets manufac- turer, promptly took advantage of the technology and intro- duced an original poster which featured the words “Western Confectionaries.”

The Pioneers of the Advertising World 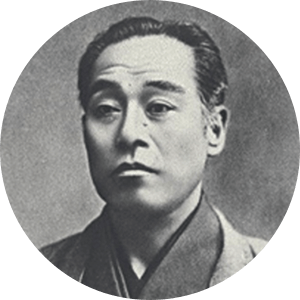 Fukuzawa helped introduce Western culture and promoted Japan’s modernization. He was one of the publishers of the Jiji Shinpo daily newspaper, a publication that from the very beginning regarded advertising as important, instructing mer- chants on modern advertisement theory and explaining the virtues of newspaper advertising and other related topics.

Multi-talented writer and central figure in the pharmaceutical industry

Following his stint as a reporter for the Tokyo Nichinichi Shimbun newspaper, he changed careers to become an entrepreneur and launch the sales of Seikisui eye drops through his pharmacy Rakuzendo. During this time, he wrote product articles for news- papers and skillfully developed promotional activities. In addition, he earned recognition for his artistic advertising techniques suchasembeddingadsinnishiki-e (colored woodblock prints).